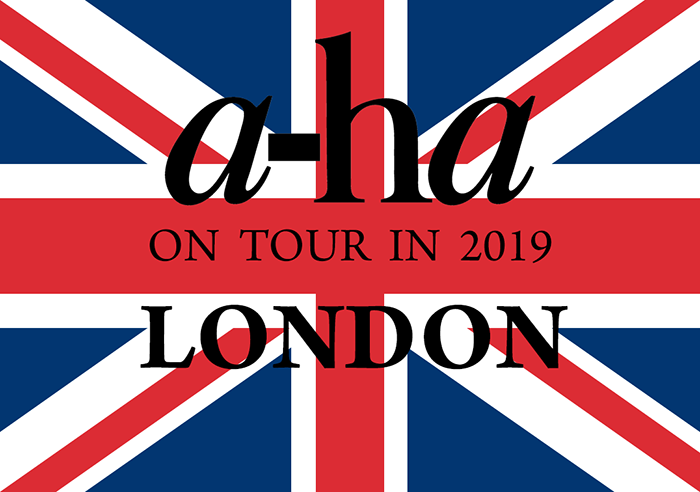 Over the past two weeks, we have been revealing a different 2019 tour city each day. Today we are announcing the final tour city: London!

As you all know, London is a very special city for a-ha. They started their career in London and lived there for many years, throughout the height of their early fame.

The legendary Royal Albert Hall has a special place in the band's history. During their first world tour, a-ha performed three sold out shows there in December 1986, culminating on New Year's Eve. Again in 2002, a-ha returned to Royal Albert Hall to rave reviews on their 'Lifelines' tour, after nine years away from the UK. The concert reignited the band's special bond with the UK fans, resulting in

In 2008 a-ha held a series of special concerts in Oslo and at the Royal Albert Hall in London, which included solo sets for Morten, Magne and Savoy, followed by a set together as a-ha. Fans from around the world converged on London to experience this very unique concert arrangement.

Their most recent performance at Royal Albert Hall was in October 2010, when they performed their first two albums 'Hunting High And Low' and 'Scoundrel Days' in their entirety, accompanied by the Oslo Philharmonic Orchestra. This was only one of a handful of shows in this format, part of which was broadcast on BBC Radio at a later date.

a-ha's show at Royal Albert Hall in 2019 is sure to be another very special evening, not to be missed.

All the details about the 2019 tour will be announced early next week, including dates and ticket links.  Be sure to sign up for the mailing list to be the first to receive pre-sale details as well. Tickets go on sale to the public on Friday November 9th.