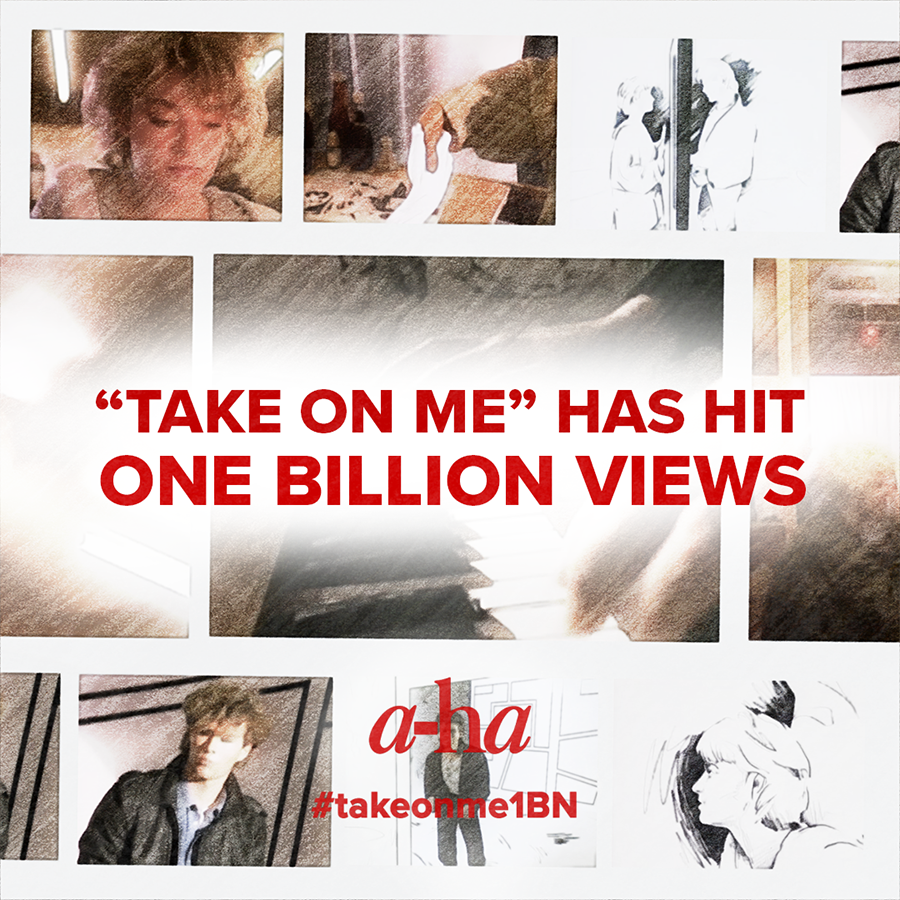 Rhino Marks This Rare Achievement With New Collectibles Available Exclusively From Rhino, Including The Iconic Video On VHS And A Print Signed By All Three Members Of The Band

"Take On Me" Is The Second Most-Viewed Video From The Eighties On
YouTube, And The #5 Most-Streamed Track Of The 20th Century

LOS ANGELES – The iconic video for a-ha’s #1 smash "Take On Me" has reached one billion views on YouTube. The Norwegian band joins the small group of music artists who have achieved this rare milestone.

Rhino celebrates the newest member of the Billion-Views Club with a special offer for a-ha fans available exclusively from the Rhino Store - lnk.to/Take-On-Me-1-Billion
Items include:

Originally released in 1985, the official music video for "Take On Me" was recently restored and upgraded to 4K resolution to improve its visual quality. Directed by Steve Barron, the video captured audiences' imaginations around the world with its groundbreaking mix of pencil-sketch animation and live action. This illustration technique – known as rotoscoping – required live-action footage to be hand traced frame by frame. To complete the video, artists Michael Patterson and Candace Reckinger spent 16 weeks rotoscoping thousands of frames.

"I remember seeing the video after a long, long time," notes Magne Furuholmen. "First, we saw it just with the live action edited and then it took another 3-6 months of drawing, hand drawing…it’s like more than 10,000 drawings for the animated parts. When you saw everything together, it was just like wow! This is just better than expectations, this is just amazing! The artistry of the animator, combined with the clear narrative idea of a love affair across dimensions.’"

Revisit the 'Making Of' both the song and its video by watching the three-part documentary on YouTube https://lnk.to/MakingOfTakeOnMe

The video for "Take On Me" helped fuel a global phenomenon in 1985 as the song went to #1 in 36 different countries and became one of the best-selling singles of all time. Today, the video joins the billion-views club alongside "November Rain" by Guns N’ Roses, "Smells Like Teen Spirit" by Nirvana, and "Bohemian Rhapsody" by Queen.