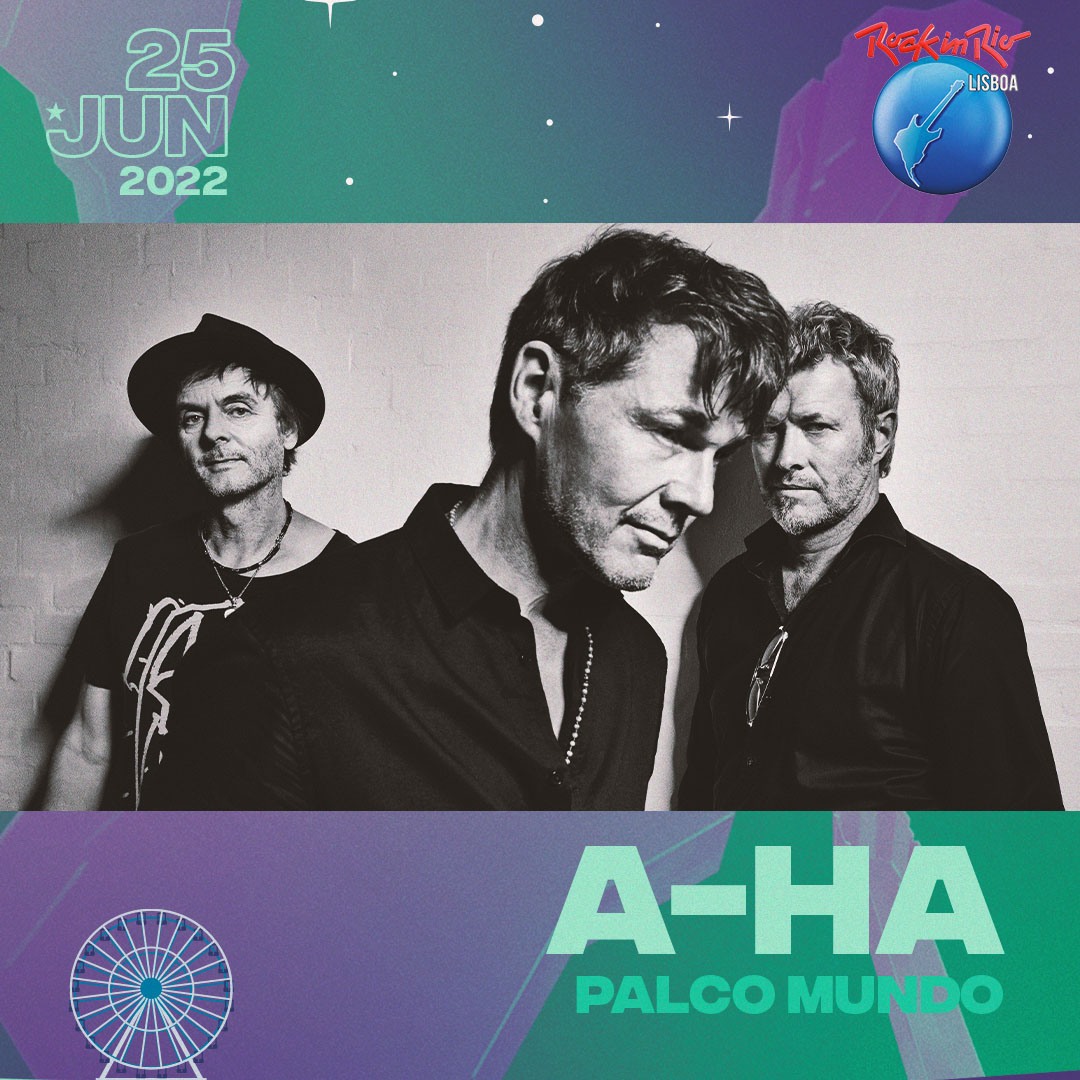 Updated! a-ha is confirmed to play at Rock In Rio Lisboa 2022 on Saturday, June 25th! Tickets are available now HERE. We hope to see some of you there!

Below is the original press release from Rock In Rio Lisboa 2020, which has been rescheduled due to COVID.

Present in all editions since 2004, the Portuguese band Xutos & Pontapés join the lineup in the first day of the second weekend.

This day’s opening will also be a first at Rock in Rio, with Bush taking over the Main Stage.

Tickets are already on sale at the usual places and at Rock in Rio’s official site.

The lineup for Rock in Rio Lisboa’s Main Stage on June 27 is already complete! The stellar soundtrack for the third day of the festival has Duran Duran taking over the City of Rock, returning to Portugal 15 years after their last concert in the country. But this won’t be the only major hit this day. a-ha will also perform at the Main Stage, making this their first show in Portugal!

On this same day, Portuguese rock band Xutos & Pontapés are also performing, being the only Portuguese music group to have performed in all festival’s editions since 2004. Main Stage opening on June 27 will be made at the sound of “Swallowed” or “The Chemical Between Us”, commanded by British band Bush.

Rock in Rio Lisboa’s 9th edition will be held at Bela Vista Park, during June 20, 21, 27 and 28, presenting a luxurious soundtrack. Besides major names that will perform at the Main Stage - such as Foo Fighters, Post Malone, Black Eyed Peas, The National, Liam Gallagher, Camila Cabello, Anitta, among other –, Galp Music Valley Stage will present a variety of musical genres from rock to pop and funk to EDM, welcoming on stage international artists such as Incubus, Ney Matogrosso or El Columpio Asesino, national major names such as Delfins, Sam The Kid, The Black Mamba, and phenomenon’s such as Bárbara Tinoco, Plutónio, Iza, Giulia Be, among others.

On June 27, at Rock in Rio’s Main Stage, people will shout “Rio” and “Save a Prayer”. This will be the day that Simon LeBon, Nick Rhodes, John Taylor, Andy Taylor and Roger Taylor will perform for the first time at the festival. The wild boys, Princess Diana´s favorite band, have sold more than 100 million copies in the world and in June Duran Duran will be at Bela Vista Park for a certainly memorable and epic show.

For their first time at Portugal, a-ha chose the City of Rock for such an expected show for years. Now, “Take on Me” and “Hunting High and Low” will be finally heard at the capital, as well as other themes that still continue to leave their imprint. After having performed two times at Rock in Rio Brasil (1991 and 2015), the Nordic trio are considered to be one of the biggest pop phenomenon of all times, having sold more than 10 million copies in the whole world with only their debut album.

Xutos & Pontapés will also take over the stage on June 27. The last concert of the Portuguese band at Rock in Rio was marked by a special moment dedicated to Zé Pedro, former guitar player. This moment joined on stage President of the Portuguese Republic Marcelo Rebelo de Sousa, Prime-Minister António Costa, and many other national figures. Since then, the band released a new album, Duro (2019), that was also the motto for their 40 year career celebration.

And in a day full of stars and big debuts, the opening of the Main Stage will be in charge of the British group Bush. The grunge band, created in London, is the responsible for so many hits, as “Machinehead” or “Glycerine”, and authors of albums like The Sea of Memories (2011), Man on the Run (2014) and Black and White Rainbows (2017) – having sold more than 20 million copies around the whole world. This June, Portuguese fans will have the chance to see the band again, this time at Lisbon, for an incredible show at Rock in Rio.

Tickets for Rock in Rio Lisboa 2020 are already on sale in the usual spots – FNAC (online and stores), Galp, Blueticket, Ticketline and international partners. The complete list is available on festival’s official site and this year, for the first time, fans can also buy their tickets through the site. Daily ticket costs 69€ and the weekend pass 112€.