Listen to a-ha's Top 30 on Spotify 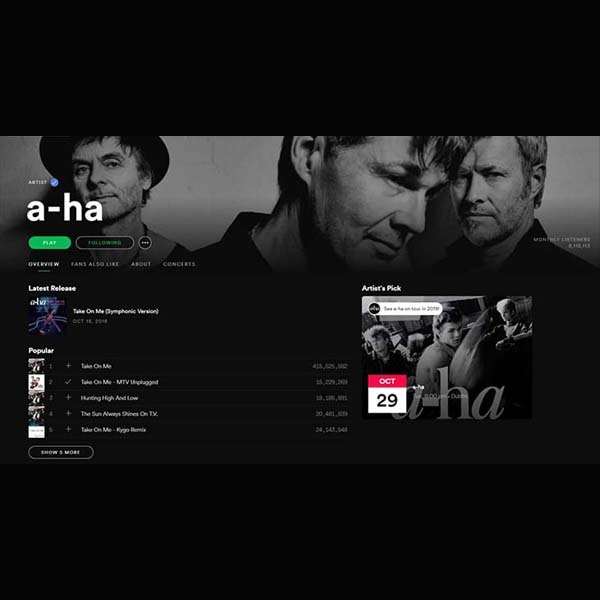 a-ha on Spotify: "Take On Me" most played from the year it came out

There is an interesting recent article in VG about Spotify's ranking of song streams by release year, with "Take On Me" the most popular streamed song from the year 1984. Note that was the original version release date; the version of the song that went to #1 and has over 474 million streams on Spotify to date was released in 1985.

According to a-ha's manager Harald Wiik, the song has also now passed five million radio plays in the United States, which is 300–400 times a day on average, for 35 years. The video has also reached 895 million views on YouTube to date, and will probably pass 1 billion sometime this year - as VG observes, a rare feat for an older hit song.

Beyond 'Take On Me'

This collection of tracks are the 30 most streamed in a-ha's Spotify catalog - aside from various versions of their 1985 #1 hit, 'Take On Me'. These tracks have been streamed over 131 million times combined. Go beyond 'Take On Me' and listen to a-ha's other top hits.