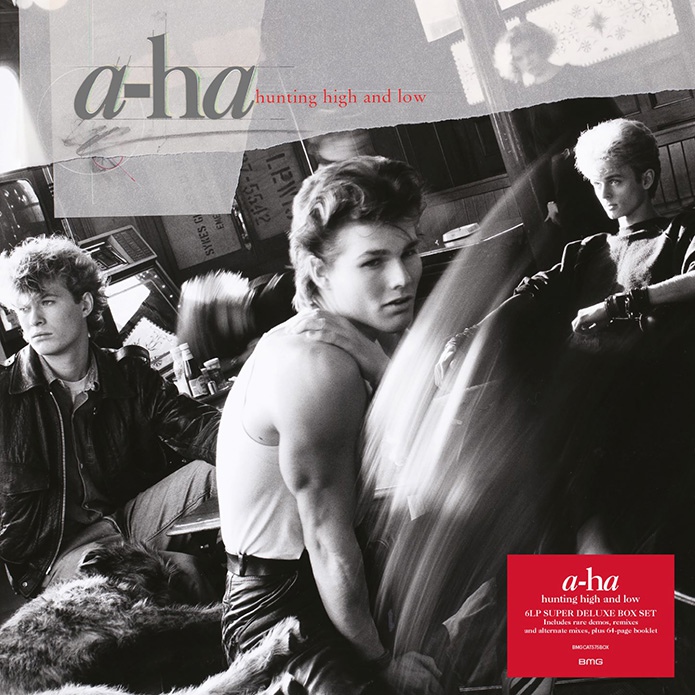 a-ha have announced that their iconic debut album Hunting High and Low will be released for the first time ever in a stunning 6LP boxset.

The boxset of the iconic 1985 album will be released on 24th February, featuring an expanded track selection including demos, extended versions, alternate mixes, and b-sides.

It will feature a highly collectible rigid slipcase box, containing the album represented across 60 tracks on black 140g vinyl, and a 64 -page 12”x12” booklet with extensive liner notes and photography.

Hunting High and Low is regarded as one of the most successful debut albums of all-time and spawned an incredible career for the Norwegian band.

With huge hit singles such as ‘The Sun Always Shines On TV’, ‘Love Is Reason’, ‘Hunting High and Low’, and of course the iconic ‘Take On Me’; a-ha achieved international acclaim, and the album saw them nominated for a Grammy Award in 1986 for Best New Artist (the first Norwegian band to ever be nominated for a Grammy.)

‘Take On Me’ itself became a No.1 single in the USA and remained on the chart for several weeks, propelled by its seminal and ground-breaking music video which featured a mix of pencil sketch animation and live action footage.

The song has gone on to have an everlasting legacy, becoming No.1 in 14 further countries worldwide, achieving 2 billion streams worldwide including being the most streamed song from the year 1985, and garnering over 1.5 billion views on YouTube, and over 1 billion views from various Tik Tok challenges.

In October 2022, the song received the BMI Multi-Million Performance Award for more than 8 million airings on the US airwaves since it was released.

On the 6LP boxset release, the band said:

“Recording Hunting High And Low was such a defining moment and an exciting time in our career and joint collaboration, so revisiting this body of work now – more than 30 years later – feels like inspiration rather than obligation.”