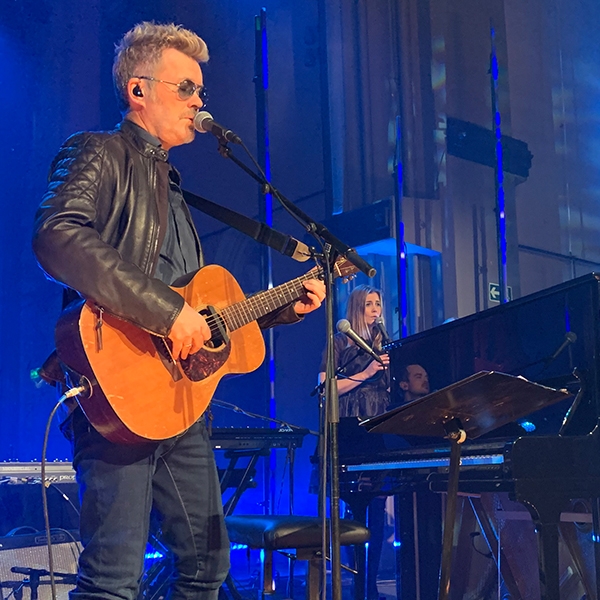 On the afternoon of December 4th, Magne performed a 'White Xmas Lies' concert at Kulturekirken Jakob in Oslo. The free concert was organized in partnership with the Salvation Army, and the attendees included both Salvation Army guests and fans chosen at random via a lottery opened to Magne's Instagram/Facebook followers and the a-ha.com mailing list.

The venue was a church which was built in 1880, and functioned as a parish church until 1985, when it closed for renovation. It reopened in 2000 as a 'church of culture', which hosts performances of music, theater, dance and more.

For this special concert, the church was decorated with Christmas trees adorned with round black Christmas ornaments, each with the title of one of three songs from 'White Xmas Lies' printed on it in white lettering. There were also ornaments with the album cover art printed on them in white. While these ornaments were not intended to be offered for sale, when the show ended, some guests asked if it would be possible to receive one in return for a donation to the Salvation Army - and so there are some Christmas trees around the world with 'White Xmas Lies' ornaments on them, and the Salvation Army was appreciative of these unexpected donations.

The lighting in the church was warm but muted, appropriate for a melancholy Christmas performance. While guests were finding seats and awaiting the start of the concert, they could enjoy some soup with bread, served by Magne and several Salvation Army representatives (see the third photo in the embedded Instagram post below).

The show lasted for about an hour, with Magne either at the piano or playing acoustic or electric guitar. He was joined by Karl Oluf Wennerberg, Even Ormestad, Morten Qvenild, Madeleine Ossum, Emilie Heldal Lidsheim, Dan Sunhordvik, Ingvild Nesdal Sandnes and Tini Flaat Mykland.

The concert was recorded for a TV-special, and Magne has expressed an intention of doing more 'White Xmas Lies' concerts in 2020.

View this post on Instagram
#WhiteChristmasLies was great. What a band! Thank you @magne_furuholmen for inviting us to record and perform your music 🙏 #rototoms are back! #drumsdrumsdrums #drummersview
A post shared by Karl Oluf Wennerberg (@karloluf) on Dec 12, 2019 at 1:55pm PST