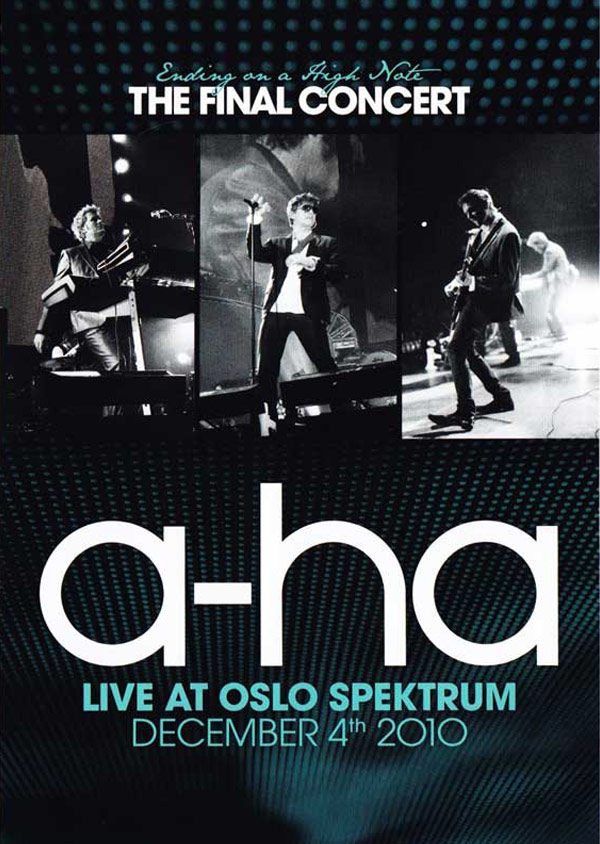 It came to an end on 4 December 2010 when Norway’s capital city hosted a-ha’s final show. Exactly nine months earlier, on 4 March, a-ha had set out on their Farewell Tour, also billed as Ending On A High Note. The band had played South and North America, Europe and Asia. Even though farewells had already been said in their home countries, the audience at Oslo’s Spektrum included fans from England, India, Mexico, South Korea, the USA, Spain, Germany, Canada, Italy – every place where a-ha had touched people. Sub-zero temperatures weren’t going to keep anyone away.

“We want to be part of this farewell”, said a fan from Seattle.

Three German fans wore shirts saying you made the soundtrack of our lives.

“It’s always special to play your home town…there seems to be people coming from so many corners of the world”, noted Pål Waaktaar-Savoy.

This was something special. But it was even more than that – the final show from the band that had found worldwide success in 1985. Twenty-five years on, a-ha had decided that it was over. “It was always an adventure”, says Magne Furuholmen. “It could have lasted two years, it lasted more than 25. No one can ask for more”.

“It doesn’t kill the music”, says Morten Harket. “All three of us are still around. This is the end, but it is also a beginning. It opens doors up. But we don’t know what that will be”.

Speaking to the Norwegian daily newspaper Aftenposten, Morten added “I do not feel any sadness. We end with victory”.

But not everyone could make it to Oslo. There were only so many tickets. Thankfully, cameras were there to capture a-ha as they bowed out at the end of 2010.

Back in 1982, Magne and Pål came to London to see if their music could make its way abroad. They returned in 1983 – with Morten – and concentrated on honing their music, recording demo after demo in a south London studio. At the end of the year they signed with Warner Brothers. But success wasn’t instant. “Take On Me”, after being re-recorded, hit the world’s charts in 1985. “We assumed we were going to have the summer hit of 1983”, confesses Morten. “ We didn’t realise it actually takes time”.

At the Spektrum, a-ha opened their show with “The Sun Always Shines On TV” the single which said that they were here for good. On its heels was 1991’s “Move To Memphis”, underpinning that this final show was about the journey. “I have always felt that my commitment was for the long run”, confirms Magne.

“We never doubted for a second that we would break through somehow”, says Pål. “We couldn't think of one good reason why that wouldn’t happen”.

As the Spektrum concert unfolded, a-ha were celebrating everything they were about, from all periods of their career. Of course, there are two phases to a-ha. Maybe three, if you count the Farewell Tour as another.

But, after being asked in 1998 to perform at that year’s Nobel Peace Prize concert, held in Oslo, they decided to mark the event with a new song, “Summer Moved On”. Pål explains it was composed as “an explanation of what had happened in the band”.

Reunited, they recorded 2000’s Minor Earth Major Sky, then 2002’s Lifelines and 2005’s Analogue. Foot Of The Mountain, issued in 2009, became their final album. The Farewell Tour was accompanied by the release of the career-spanning anthology, 25, and the final single ”Butterfly, Butterfly (The Last Hurrah)”.

Although the final show inevitably looked back, Morten says “I’ve never collected memories, I never think like that. When something happens, I’m there in the moment”.

Asked whether he has a favourite song, Morten counters “would it be the same song every night? It’s a shifting thing, constantly rediscovering a song. I find new approaches when you feel you’re touching the essence of that song. It’s very important to find that right kind of focus before you walk on stage – it’s one of the challenges on tour”.

For Magne, “‘Scoundrel Days’ is still one of the pop songs I am most proud of”.

Pål is with him, saying, “‘Scoundrel Days’ or ‘Manhattan Skyline’ are probably my favourites of the ones we’ve written together”.

“Manhattan Skyline” was one of the songs that showed a-ha were pushing forward musically. It was a brave choice as a single, as its portmanteau structure wasn't necessarily that radio friendly. “We were always searching", notes Pål “After finishing one song, you would be pulled in a different direction”.

Some songs obviously bring back memories from the ‘80s and early ‘90s. Pål recalls “200,000 Brazilians sing ‘Hunting High And Low’ along with a solo acoustic guitar. It felt amazing, sounded beautiful”.

More recently, he remembers “the first show after the seven year break from playing live in Hamburg. Morten hitting the long note on ‘Summer Moved On' with such a delivery that gave me shivers like nothing else”.

“‘Summer Moved On’ is a technical challenge”, notes Morten. “If the acoustic conditions in the hall aren’t right, the song can suffer”.

Some songs evoke places, others evoke moods and influences. “Move To Memphis” was heard on the Memorial Beach album, which Magne explains was “a-ha deeply immersed in Americana and the mythical landscape of American music. The idea was to make a record which was more groove oriented than the previous ones”.

Another song – which a-ha made their own – was perhaps more surprising: their version of the Everly Brothers’ “Crying In The Rain”. Magne explains that “our manager then had played bass for the Everly Brothers during the ‘60s and was a close personal friend of Phil Everly. He also managed them during their comeback at the Royal Albert Hall in 1984 where we met the Everlys for the first time. Next Christmas they presented a-ha with three Everly Brothers guitars made from the same tree! Being huge Beatles fans, growing up and knowing how influential the Everly Brothers had been for the early Beatles’ sound, we thought that it would be a nice tribute to cover one of their hits”.

Then there were songs where a-ha tried new ways of working, such as their James Bond theme “The Living Daylights”, made with and co-written by the legendary – and sadly recently-passed – composer John Barry. “To get the James Bond soundtrack was a big deal”, says Pål. “We heard that huge bands like Queen were submitting songs, but somehow we got it. I loved the title from the get go and the tune popped in my head after a few days. I remember playing the song to Morten and Magne for the first time backstage at Top Of The Pops. John Barry added a wonderful dark and droning string score with heavy brass stabs that just reeked Bond. Then we went to New York for the mix with Jason Corsaro who also added some exotic percussion tracks that further strengthened the Bond vibe”.

After “The Living Daylights”, the Spektrum show had to end with “Take On Me”. “It fills me with such joy”, says Pål, reflecting on the song. “I wish I could play it twice every show. I still have dreams about it and I wake up drenched in my own sweat”.

At the Spektrum though, Pål says “everything just felt super easy, and we could let ourselves be carried along by that wonderful crowd. It was one of the great nights”.

Yet still, a-ha bowed out. They had decided it was the end and that is what it became. “It’s the first time we stuck to plan,” says Morten “It’s a strange emotional response. It’s one thing to be doing it theoretically to celebrate everything we’ve had together. But that’s the theory. Then you get the emotional response, people don’t want to believe it. It is real. It takes time for that to sink in.”

After watching the film of this poignant concert it will sink in. a-ha are gone, but it’s not only the music that live on. The memories, atmosphere and joy of this last night live on too. Some bands fade out, others just seem to vanish. Then there’s a realisation that they’re not around any more. Not a-ha. As Morten says, there was a plan. a-ha had decided to do it differently and with dignity, taking nine months to say goodbye and give the world a chance to say goodbye. Oslo was the final goodbye. For those who were lucky to be there, this DVD will be essential. For everyone else, all those who couldn’t make it, this DVD will still be essential.