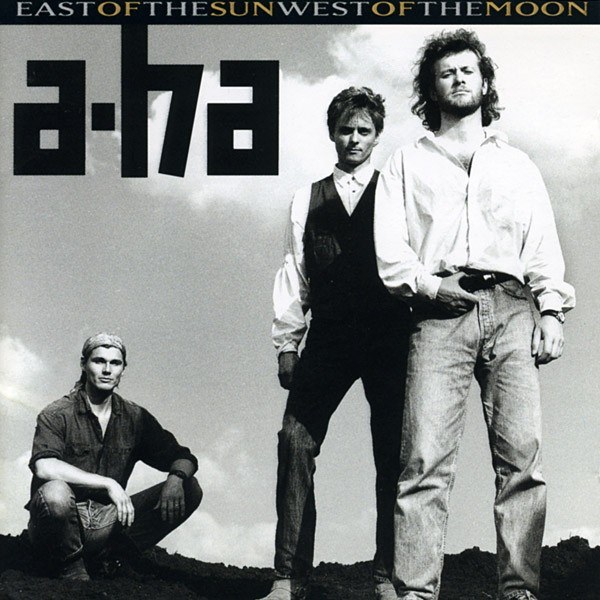 a-ha's fourth album, East Of The Sun, West Of The Moon, marked a departure from their previous albums. Acoustic guitars were added into the mix, and the piano replaced the keyboard/synthesizer of previous albums. The album also features the first non-Morten lead vocals, by Magne on "The Way We Talk."

Paul: "We put together a band with Norwegian musicians, and did full takes on all the songs. It was something completely different, it was a much more human expression. You can listen to it several times and find nuances, 'cause it ain't a machine spitting it out."

In 1991, a-ha was yet again on tour. This time they made history with the largest paying audience at a concert: 198,000 attended a-ha's concert at Maracana Stadium in Rio de Janeiro, Brazil.

Steven McDonald, AllMusic Guide: "This is a nicely crafted collection of songs, performed and sung beautifully, with lots of echoes and suggestions tucked into the music. While not an album one can discuss at length, it's an album that's a pleasure to listen to..."

PRODUCED BY CHRIS NEIL, EXCEPT FOR "EARLY MORNING," "EAST OF THE SUN," "WAITING FOR HER," "THE WAY WE TALK" AND "(SEEMINGLY) NONSTOP JULY" BY IAN STANLEY.

Lyrics Crying In The Rain

Someday when my crying's done
I'm gonna wear a smile and walk in the sun
I may be a fool
But till then, darling
You'll never see me complain
I'll do my crying in the rain

Say you know
You will
Move me like you do

Say you know
You will
Save me like you do

Lyrics I Call Your Name

But in that gentle dark
Man, we tore ourselves apart

Oh God we used to laugh
Is the fire dying, babe?
It hurts to ask
Let me hold you for awhile

Lyrics East Of The Sun

Money talks
And hey, I'm listening
I've lived without it
Enough to miss it
Where I'm going
I'll get there soon
East of the sun
And west of the moon

Wet grounds, late September
The foliage of the trees
I came upon this feeling that someone's lying
Covered by sycamore leaves

Lyrics Waiting For Her

So why didn't I
Take the measures justified

Our love has always been the same
She comes, then goes away again
Oh yeah

But why didn't I take that time and put it right

And when she's sleeping by my side
Eyes closed, all knowledge trapped inside
- Oh yeah

Asked a girl if she needed a ride
She said, "Sure, babe, but I wanna drive"

Lyrics The Way We Talk

Baby, these fights we have aren't always fair
Was this problem always there

It's the weight below us
And our fate before us
Like a rolling thunder
Rolling up from under
Don't ever leave this way
I know it's getting harder, but hey
If your world should crumble, yeah
And the rain gets in
Running through your skin
Soaking you outside in

The rain ... see it falling
But I don't know how long it will be
Until the storm is over
I'll wait
I will

Like the years of silence
To the growing violence
Like a rolling thunder
Rolling up from under
Don't ever leave me this way
Wait a little longer, yeah, stay
Through all the night I tumble, yeah
When the rain comes in
I will shed my skin
Losing it from within

See the rain ... it's falling
But I won't be leaving your side
Until all is over
I'll wait
I will

It's hard to conceive it
All comes to an end
A joke when it's funny, well
I laugh and pretend