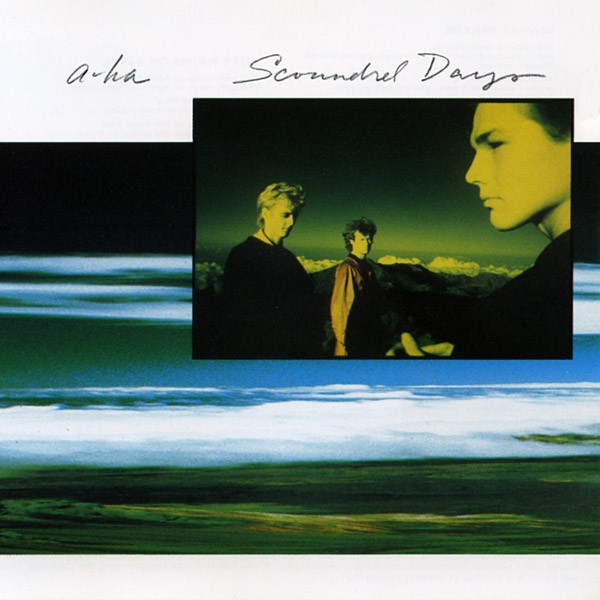 Released in the midst of the 1986 world tour, songs from Scoundrel Days infused a-ha's live setlist with a new, darker sound. A departure from the pure pop of Hunting High and Low, this album contains several mainstays of a-ha's catalogue, "I've Been Losing You," "Cry Wolf" and "Manhattan Skyline."

a-ha's sophomore effort sold over five million copies worldwide and is a prominant favorite of their fans. The album is also a favorite of Morten's: "Scoundrel Days is the record that most closely resembles our demos. It's simply an extension of the demos. It didn't sell anywhere near as much as Hunting High and Low. It demands more from the listener. That's why it became a darling for many."

Ned Raggett, AllMusic Guide: "The opening two songs alone make for one of the best one-two opening punches around: the tense edge of the title track, featuring one of Morten Harket's soaring vocals during the chorus and a crisp, pristine punch in the music, and "The Swing of Things," a moody, elegant number with a beautiful synth/guitar arrangement (plus some fine drumming courtesy of studio pro Michael Sturgis) and utterly lovelorn lyrical sentiments that balance on the edge of being overheated without quite going over...The '80s may be long gone, but Scoundrel Days makes clear that not everything was bad back then."

PRODUCED BY ALAN TARNEY EXCEPT "I'VE BEEN LOSING YOU," "MAYBE MAYBE" AND "SOFT RAINS OF APRIL," PRODUCED BY MAGNE FURUHOLMEN AND PAUL WAAKTAAR.

Was that somebody screaming?
It wasn't me for sure
I lift my head up from uneasy pillows
Put my feet on the floor
Cut my wrist on a bad thought
And head for the door

Was it too much to ask for
To pull a little weight?
They forgive anything but greatness
These are scoundrel days
And I'm close to calling out their names
As pride hits my face

Lyrics The Swing Of Things

Oh, but how can I speak of the world rushing by
With a lump in my throat and tears in my eyes
Oh, have we come to the point of no turning back
Or is it still time to get into the swing of things

Let us walk through this windless city
I'll go on till the winter gets me
Oh, "sleep" you wrote "sleep, my dear"
In a letter somewhere

Oh, but how can I sleep with your voice in my head
With an ocean between us and room in my bed
Oh, have I come to the point where I'm losing the grip
Or is it still time to get into the swing of things

Oh, when she glows in the dark and I'm weak by the sight
Of this breathtaking beauty in which I can hide

Oh, there's a worldful out there
Of people I fear
But given time I'll get into
The swing of things

Yes, when she glows in the dark and I'm struck by the sight
I know that I'll need this for the rest of my life
What have I done, what lies I have told
I've played games with the ones that rescued my soul

Oh, have I come to the point where I'm losing the grip
Or is it still time to get into the swing of things

Lyrics I've Been Losing You

It wasn't the rain that made no difference
And I could have sworn it wasn't me
Yet I did it all so coldly, almost slowly
Plain for all to see

Oh c'mon please now
Talk to me
Tell me; things I could find helpful
How can I stop now
Is there nothing I can do
I have lost my way
I've been losing you

It wasn't the rain
That made no difference
Nervously drumming on: run away
But I want the guilt to get me
Thoughts to wreck me
Preying on my mind

So, please now
Talk to me
Tell me things I could find helpful
For how can I stop now?
Is there nothing I can do
I have lost my way
I've been losing you

Dawn awaits a sleepless, English town
Of coloured gray
Here I roam the streets without you
As summer fades away

Down in the city at nights
The cold wind blows

Down in the city at nights

We sit and watch umbrellas fly
I'm trying to keep my newspaper dry
I hear myself say, "My boat's leaving now"
So we shake hands and cry
Now I must wave goodbye
Wave goodbye

How can you say that I didn't try?
You know I did
You see things in the depths of my eyes
That my love's run dry
(I don't wanna cry again)

"Night I left the city
I dreamt of a wolf"

You can start, but you cannot stop
You give in, but you can't give up
You can tell all your desperate jokes
To a world that puts your
Love on hold

Lyrics We're Looking For The Whales

Lyrics The Weight Of The Wind

You speak into the falling rain
Words you'd lost, but found again
I see their snakey arms entwined
So clear and cruel
In your jealous mind

I don't know, but it's been said
Decisions travel far from heart to head
Maybe, maybe
Maybe it was over
When you chucked me out the
Rover at full speed
Maybe, maybe oh baby

Lyrics The Soft Rains Of April

Anybody home now
I am on the phone now, please
The soft rains of April are over
The ferry across the water to Dover, over

Anybody home now
I am on the phone, oh I'd like to go back
Is it raining back home
I'm so alone