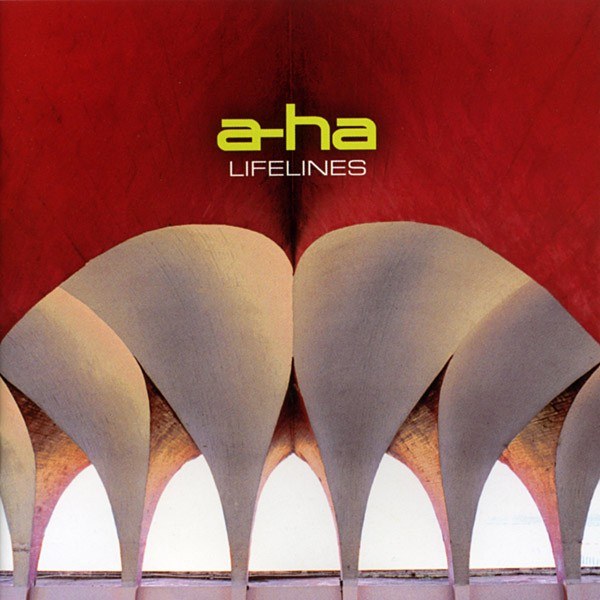 With Lifelines, a-ha began to collaborate in new ways. Eight of the songs are written by Magne, four of which were written together with Morten. The album went platinum in Norway, and the ensuing seven-month tour was kicked off at Ullevaal Stadium in Oslo.

Praised as 'complex and sumptuous' in the German press, Lifelines consistently received high marks in reviews. The recognition was hard-earned: the album was another difficult one for the band to make, and there were often tensions over each person's contribution. However that may be, in the end there were two top five hits, "Forever Not Yours" and "Lifelines."

Just one sign
To make us believe it's true

What do you see, where do we go
One sign; how do we grow?
By letting your lifelines show
What if we do, what then?
One sign- how will I know?
Don't let your lifeline go

You know the way, you've been before
I’ve seen the signs outside your door
You've set the rules
Their bitter taste can't be ignored
It just the same, just like before
You wanted more

I loved the sun, I loved the rain
I gave it up, but all in vain
I loved the way it was before
So bittersweet to be adored
We had it all, you let it go
You wanted more

But in the end, what is a friend
If not someone, to help pretend
Remember me,
You know my name, I'm still the same
But not for you, that's not enough
You wanted more

I loved the sun, I loved the rain
I gave it up, but all in vain
We couldn’t change, you know the score
So bittersweet to be adored
We had it all, you gave it up
You wanted more

Just say it
You loved the way it used to be
The way it was with you and me
It came to late and left too soon
Just like the rings around the moon
We had it all, you let it go
You wanted more

We had it all
You gave it up
You wanted more

Lyrics Forever Not Yours

Lyrics There's A Reason For It

And everything is all too much
Hot and bothered, yet cool to the touch
And everyone is worlds apart
It must have been this way right from the start

And everyone is all too well
All well-adjusted people, can't you tell
And everything is all too fast
Just add water, nothing's built to last

Lyrics Did Anyone Approach You

Ah, the sunlight hits the corner of your eye
As it bounces off the morning sky
A summer in the 70's fly by
Bye!

Ah, daylight hits the corner of your mind
Steals the thoughts you thought
No one could find
close your eyes
And it will rob you blind

Ah, daylight hits the corners of your mouth
Steals the words
That filled you up with doubt
Open up and let them all fall out

Ah, honey smooths the wrinkles from the bed
Gone the indentations of your head
Leaving just a frown upon your forehead

Worry works a wrinkle over time
Open up and let it rob you blind
Incidental memories collide
People tell me you've been blinded by;
An afternoon high
Afternoon high

Oranges on appletrees
Birds that mate with bumblebees
Endless possibilities

We're gonna go downtown
I hear this great new place
Has opened up
And when we get there
I don't know
It's taking ages, don't you know

But the place in question
Is hard to find
Not a cab ride to the door
And you wonder in your doubtful mind
Is it really worth all that and more?

Lyrics Turn The Lights Down

When you're down and out, just hold on
Realize that nothing lasts long
We must believe the things we cannot see
Everything's allright with me
Turn the lights down, the lights are too strong
I'm coming home

Turn around, the night is still young
Keep your lights on, I'm coming home
You must decide now where you want to be
You're the one that said to me
Realize that nothing lasts long
I'm coming home

you don’t know me girl
I’m faceless in the crowd
the things I could show you, babe
c’mon, c’mon to my cloud

I’m alive and tonight
something’s falling, babe
You and I, or the sky
I can see it in your eyes

Stories are painted
In lines on your face
Misunderstandings and little mistakes
A chance to start over is all that it takes
You know if you do;
Your life is a canvas, the colours are you

Follow me out, follow me round
Let’s make the road up as we go along
Just as we planned
You want to believe it, you know that it’s true;
Your life is a canvas, the colours are you

You cannot erase them;
The words that were said -
Just paint them over inside of your head
All that is needed;
You know you must make just one leap of faith
Everything else will fall into place

Follow me out, follow me round
Let’s make it up and go back
To where we began
All that is needed is one leap of faith -
Everything else will fall into place

Stories are painted
In the lines of your face

In the time we have left
We'll raise eyes to the sky,
Don't ask how, don't ask why
Just fly dragonfly
Fly, dragonfly