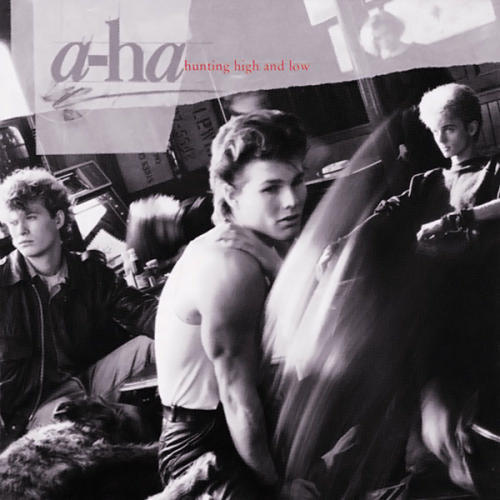 Beginning with a bang, a-ha's debut album sold more than eight million copies worldwide and spawned three #1 hits. In the fall of 1986, "Take On Me" and "The Sun Always Shines on T.V." were nominated for 11 MTV Video Awards combined, and a-ha won eight of these.

In June 1986, a-ha began a world tour which carried on through August 1987. The band had never played a single concert when "Take On Me" shot to #1 in America; soon they could boast a 16-country, 113-city tour under their belt along with countless interviews and television appearances. With Hunting High and Low a-ha had arrived.

Magne: "It's a record from a band that wanted everything - all at once."

Tim DiGravina, AllMusic Guide: "It's a cohesive album with smart pace changeups, and it rarely fails to delight or satisfy a listener's need for a synth pop fix...One can't escape the feeling that Hunting High and Low is a product of the 1980s, but with highs like "Take on Me" and "The Sun Always Shines on T.V.," and no lows in sight, a-ha's debut is a treat worth relishing."

"TAKE ON ME" AND "THE SUN ALWAYS SHINES ON T.V." PRODUCED BY ALAN TARNEY; "LOVE IS REASON" PRODUCED BY JOHN RATCLIFF WITH A-HA.

Lyrics Take On Me

We're talking away
I don't know what I'm to say
I'll say it anyway
Today's another day to find you
Shying away
I'll be coming for your love, OK?

And his thoughts are full of strangers
Corridors of naked lights
And his mind once full of reason
Now there's more than meets the eye
Oh, a stranger's face he carries with him

He likes a bit of reading on the subway home
A distant radio whistling tunes that nobody knows
At home a house awaits him, he unlocks the door
Thinking once there was a sea here
But there never was a door

High
There's no end to the lengths I'll go to
Oh, for you
I'll be hunting high and low

But would she laugh at my accent
And make fun of me
Oh, it doesn't seem like this
Blue sky's here for me

I'm in this big world without you
Nothing to my name
Oh, I never knew that
Blue sky meant such pain

Lyrics And You Tell Me

And you tell me
That I don't love you

My breath was coming fast
And as I make a start
You turn to go
Oh, oh
I'll do what you want me to
I'll cry at the thought of the loss of a heart

My morals are changing fast
I told you it wouldn't last
You turn and go
Oh, oh
I'll be what you want me to be
I'd die at the thought of the loss of your heart

Lyrics Here I Stand And Face The Rain

Help me, I need your love
Don't walk away
The dark scares me so
We're nothing apart
Let's stay friends forever
Forever